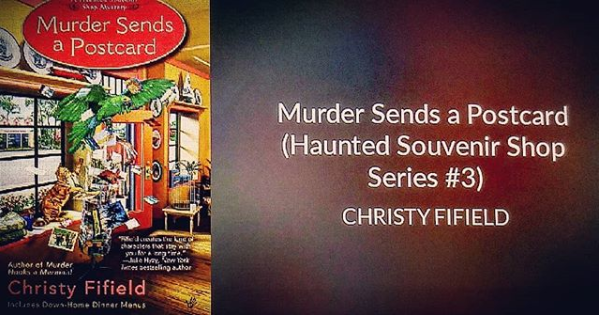 When Back Bay Bank in Keyhole Bay, Florida makes a risky loan to a local husand and wife, and it goes belly up, the corporate bank sends in senior auditor Bridget McKenna to investigate the shady dealings the local branch is involved in. When Bridget turns up dead, Glory Martine knows something is fishy about her death.

The Haunted Souvenir Shop Mystery series is one of my new favorite cozy mystery book series. Although the plot lines are very typical, the way the series is written sucks you in and makes you fall in love with the characters. The third installment, Murder Sends A Postcard, by Christy Fifield is no different from its predecessors. I absolutely love all the characters and feel like I'm right there with Glory as she goes through her day. It's as if I'm part of the book too. 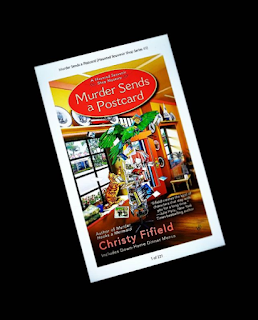 One thing that I thought was dead on in the description in Murder Sends A Postcard (A Haunted Souvenir Shop Mystery, #3) was how distrustful most everyone was of the character Bridget McKenna . . . just because she was a yankee. This happens way more often than you know in small towns in the South. My mom had a similar experience when she moved down to Georgia from the midwest; she was constantly called a yankee. And, I've experienced it myself when I went to a writer's conference in Augusta, Georgia; I was flat out told that I should go back to Atlanta because surely there was a writer's conference that I could've attended there. Small towns in the south just don't like outsiders, especially when they're from the north.

Something I was estactic about is that the character Jake finally revealed some of his back story and how he came to live in Keyhole Bay, Florida. This didn't happen until the end of the book, but it definitely took too long to find out this information. I wonder if the author was stuck on what to write about his background. We also learn some surprising information about Uncle Louis and Sly, and with that, there is a little history lesson . . . Sly was in love with a white woman, but back then, people of different races weren't allowed to get married in the United States. I am so glad that I live in a time where this isn't an issue. Sadly, racism is still rampant in this country. (I'm not trying to make a political statement by any means.)

On another note, every time the name of the bank was mentioned (Back Bay), it immediately made me think of Boston, Massachusetts because there is an area of the city called Back Bay.  And, every time I visit Boston, I stay in the Back Bay area.

I gave Murder Sends A Postcard four stars out five stars. The only reason for this is because I felt like the murderer came out of left field. Other than that, I was absolutely enchanted with this book and stayed up to the wee hours of the night to finish reading it.