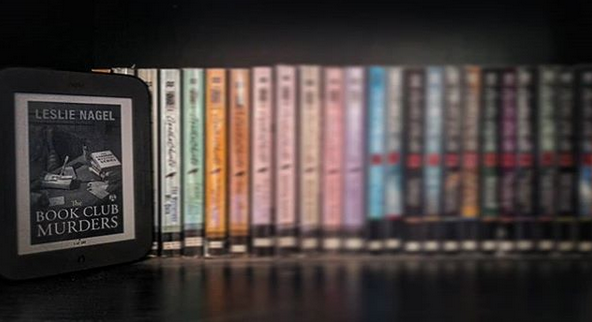 The Book Club Murders (Oakwood Mystery, #1) by Leslie Nagel is a book that I downloaded to my Nook tablet quite some time ago, and I just now got around to reading it. I didn't realize that it was the first book in a series when I bought. However, I am glad that it is part of a series because it was really well written for a cozy mystery, and I definitely want to read the next book.

Oakwood, Ohio resident Charley Carpenter belongs to a book club with some of the wealthiest women in the city. They've dubbed themselves "The Agathas" after Agatha Christie as their book club focuses on reading mystery novels and trying to solve the mystery within the book before the killer is revealed to them. When several people are found dead, the circumstances can all be tied back to books that "The Agathas" have read that fall. The police pull in Charley to help determine which woman in the book club is committing these murders.

Let me begin by saying that I absolutely love the location of The Book Club Murders (Oakwood Mystery, #1) because I have family that live in the Dayton, Ohio metropolitan area that includes the city of Oakwood, where the book takes place. It was cool to see street names in the book that I've driven down myself (i.e. Shroyer Road and Far Hills Avenue). Many of the places in the book are real places; however, I haven't frequented any of those places. 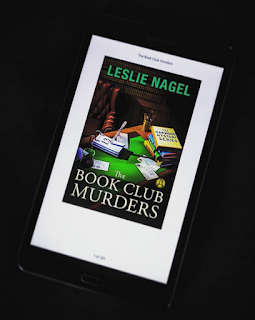 Another thing I absolutely loved about the book is that the book club called themselves "The Agathas" after the author Agatha Christie. I thought this was very clever of the author. I wished I had thought of a name like this when I had my book club that focused on mysteries, thrillers, horror, and suspense novels. It almost makes me want to start my book club back up.

Leslie Nagel kept me guessing at who the killer was. Since so many of Agatha Christie's books were mentioned, I kept going through some of their plot lines trying to figure out whodunit. Murder on the Orient Express and The Murder of Roger Ackroyd both crossed my mind when trying to figure it out. For those of you who haven't read either of those Agatha Christie books, I won't give anything away, but I definitely recommend reading both of those books. However, those of you who have read those two books will know where my thoughts were headed.

There isn't too much I can complain about. I was getting irritated that the author kept mentioning the leading man's scent . . . "coffee and soap, a hint of sandalwood". The only other thing I could complain about is a particular sentence that didn't make any sense to me:  "Charley prepared to beard the lioness in her den." I guessing that is a Midwest saying for something although I haven't heard any of my family use it, not even my parents.

All in all, I was absolutely enchanted by The Book Club Murders (Oakwood Mystery, #1) by Leslie Nagel. So much so that I kept thinking about the book during work hours and was itching to get back to the book so I could finish it. Four out of five stars is what I gave the book.