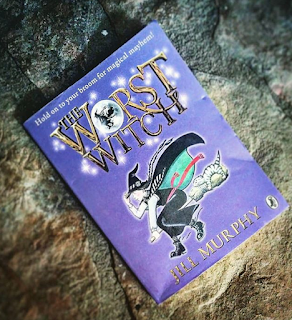 In 1986, a movie called The Worst Witch was aired on television, and as a seven year old child, I absolutely fell in love with it. A few months ago, I thought about how much I loved it and decided to see if it was available on Netflix. It was not available, but it had been made into a television series back in 2017 and that was available. I did watch a few of the episodes and thought they had been done well. It made me research the original movie, and I found out that it was based on a book series from the 1970's. How I did not know this I'll never know, but I decided to buy a used copy from ThriftBooks.com.

When I received the book The Worst Witch (Worst Witch, #1) by Jill Murphy, I couldn't wait to read it and see how closely the original television movie compared to the book. I wasn't disappointed. The 1986 movie did a phenomenal job in adapting the book for television.

The Worst Witch (Worst Witch, #1) by Jill Murphy is about twelve year old Mildred Hubble attending a boarding school for witches, and she is the worst student in her class. Everything she attempts to do, Mildred fails miserably and is often called into the headmistresses office to be reprimanded. She decides to run away after her latest failure in a school production.

I thoroughly enjoyed this book, even as an adult. It is very similar to the Harry Potter book series and is perfect for children who are too young to read that series. Some might even argue that J.K. Rowling took a few ideas from this book for her series. Even though The Worst Witch is targeted towards children between the ages of eight and twelve, I think it is more appropriate for kids between the ages of five and eight. It has great black and white illustrations throughout each chapter to help children visualize the story.

As a young child, I was very reluctant to read chapter books as I've mentioned in other posts, and it was until I was nine or ten that I became an avid reader when I discovered the Sweet Valley Twins book series at a garage sale. Had a librarian suggested the Worst Witch book series when I was six, seven, or eight years old, I would have become a bookworm that much sooner. So, if you're a librarian, take note of this!!! I gave The Worst Witch (Worst Witch, #1) by Jill Murphy five out of five stars.