Book Review: Wish You Were Here: France by Robin O'Neill 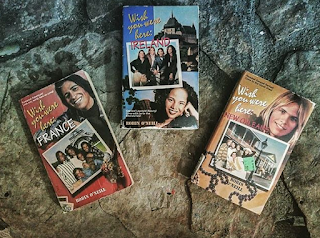 In high school, I discovered a new book series by Robin O'Neill called Wish You Were Here. The first book in the series is Wish You Were Here:  France. The original publication date was July 1996, but they must have released them early as I had the first two books and had already read them when I went to France a couple days after the 1996 Olympics began in Atlanta. I live in Atlanta and missed the majority of the Olympics when it was here, but that is besides the point. Anyways, I became enchanted with the series and kept hoping there would be more than three books in the series. However, from what I can tell, there weren't any other books published than the original three.

Wish You Were Here: France by Robin O'Neill is about a tour group called Getaway Tours that has chaperones that take teenagers to different destinations around the world for a week at a time. Tim and Francine Atkinson are the guide tours for the excursion to France, and they have five girls and two guys in their charge as they explore the south of France. Their first stop is Carcassonne in the Languedoc Region. Luci, Jay, Glin, and Logan discover that the famous Cather treasure is supposed to be buried in the medieval village, and they set out to discover where it is buried. 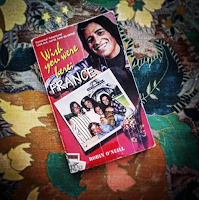 This book is fantastic because you really do learn a little bit about the area it's set in and some history. The places they visit are real life places that you can visit yourself! For instance, one of the places is Rennes-le-Château. It's a great way to get your teen interested in history and traveling at the same time, and it definitely made me want to visit France again so I can see all the sites mentioned in the book. Don't worry though. It isn't all about travel and history. There is adventure, drama, and even a little romance, but not anything too risque.

Another thing that is great about this series is that it's totally different from anything else I've read in the YA (Young Adult) genre of books. So many of them seem to have similar themes and plots, so it was a breath of fresh air to have a fiction book based on something that so many people like to do . . . travel. I haven't seen or heard of any other books in this genre that are anywhere close to the Wish You Were Here series. I wish the author would publish more books in the series, but she seems to have disappeared in a deep, dark hole.

I would definitely recommend Wish You Were Here: France to tweens and teens who have an interest in travel and/or history, and parents don't have to worry about it being too adult for the tweens. I give it five out of five stars.