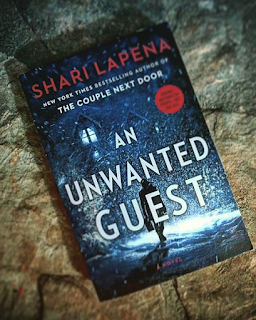 An Unwanted Guest by Shari Lapena left me in awe. Written in alternating narratives, the reader definitely gets several points of view of the story line, and you never know if they're being a reliable narrator. I had three people that I suspected of being the murderer, and none of them ended up being the killer. I did briefly have a fourth person I suspected, but I quickly dismissed him / her and that is who it ended up being.

What I loved about An Unwanted Guest is that it was a bit different from Shari Lapena's other novels, and it was very reminiscent of Agatha Christie's And Then There Were None, aka Ten Little Indians, and Murder On The Orient Express. In fact, I think Lapena gives Agatha Christie a run for her money with this book. It was that fabulous! There are just not enough words for me describe how enthralling this book was. I ended up staying up into the wee hours of the night to finish it because I just had to know what happened before I went to bed. Thank goodness today is a holiday, and I didn't have to work today!!

Mitchell's Inn is a remote lodge in the Catskill Mountains in upstate New York. As guests begin to arrive on a Friday afternoon, the weather is becoming quite treacherous, and even though there were a lot of guests booked for the weekend, many decide to stay at home, and several of the employees can't make it to the lodge for work. When the snow turns into a blizzard and cuts off the electricity, the guests and hotel owners settle in for the long haul. But, then the unexpected happens . . . someone dies. It appears to be an accident, but then two other bodies are found, and everyone is a suspect.

The only negative thing, which really isn't a negative, I can say about An Unwanted Guest is that it took me about 15 to 20 pages to really get into the book, so if you struggle at the beginning of the book, stay with it because it is definitely worth the read. Shari Lapena is becoming one of my favorite authors, and I can't wait to read more from her. Apparently, she has another novel with an expected publication of July 30, 2019 called Someone We Know, and I am on pins and needles for it to come out!