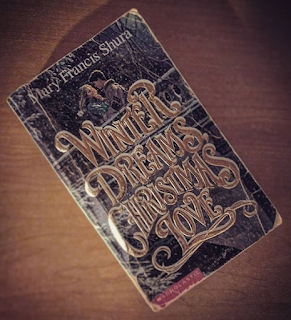 Have you ever had a book from your childhood that has stuck with you over the years? Winter Dreams Christmas Love by Mary Francis Shura is one of those books for me. I remember when I bought the book . . . it was a Friday night when I was thirteen or fourteen years old. I climbed into bed and began reading the book around eight or nine o'clock at night and finished it within a couple of hours. I loved it so much that I immediately began reading it again that night. I must have reread it four or five times that weekend. I guess you can say that I was obsessed! However, I really related to the book when I was in high school. Rereading it as an adult brought back those angsty feelings I had as a teenager. I mean who didn't wish that their crush felt the same way towards them?!?! But, as an adult, I know things don't always wrap up in a neat little bow.


Winter Dreams Christmas Love was a very well written young adult novel that spans three years of Ellen Marlowe's high school career and the trials and tribulations of being a student, making new friends, and falling in love. Although this book was written in the early 1990s, it really has stood the test of time in my opinion, and I think tweens and teens today would still be able to relate to what the main character is going through. What is nice about this book is that it is perfect for tweens and teens alike because there is no overt violence, cursing, or sex in it. It does touch on jealous boyfriends who can be a little rough, but unlike many books, advice is given that Ellen stay away from her ex-boyfriend because he is the one with the problem, not her, which I am glad that advice was taken.

There really aren't any complaints I have about this book with the exception of some editing errors that led to some inconsistency in the time line. However, that was easily overlooked in my book because I still love the story as an adult and reread it every few years when I'm feeling nostalgic. To this day, I still want a sequel to the story to see how Ellen and Michael's lives end up during and after college, but I'll never get that book as the author passed away in 1991. I give Winter Dreams Christmas Love five out five stars.

Synopsis of Winter Dreams Christmas Love:  Ellen Marlowe is gobsmacked during her freshman orientation when she meets the Big Man On Campus and joins the long list of girls who want to date Michael Tyler. As her freshman year progresses, Ellen thinks she has gotten over her crush, but then Michael does something to set off her feelings again. Will Ellen get over her crush or end up landing the big man on campus?