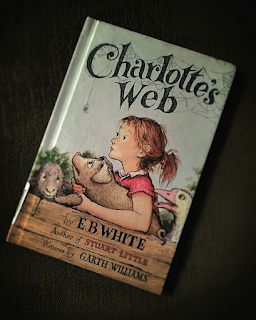 I first read Charlotte's Web by E.B. White 30 years ago in the spring of 1989 as an almost 10 year old in the fifth grade. It was not a book I chose to read as it was required reading for my class to prepare us for middle school and all the books we would be required to read. Of the two books we were required to read that year, this was the one I actually enjoyed, with the exception of the ending. This was the first book I read that actually made me cry.

Charlotte's Web tells the story of a pig named Wilbur and how he is saved from death a couple of times, first by a little girl named Fern and then by a spider named Charlotte who befriended Wilbur when he was lonely because none of the other farm animals would play with him. The story follows the friendship between the pig and spider until Charlotte's death. Charlotte's death is what really got to me as a kid and as an adult rereading the book. What made it even worse was that she died alone, and no one should have to die alone. What made me even sadder is that as Fern grew older, she spent less and less time with Wilbur. 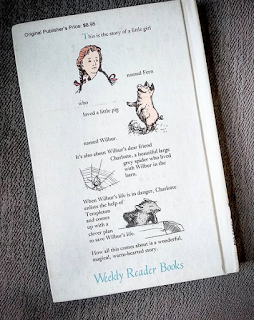 The major themes of Charlotte's Web include some very adult themes that are dealt in a sensitive way for children. Those themes are life, death, and friendship. E.B. White also does a nice job of introducing new vocabulary and describing what the words mean without disrupting the story line.

In my opinion, this is a must read for every child. With that being said, depending on your child's emotional maturity, I would make sure that they are able to deal with death before allowing them to read Charlotte's Web. Or, at least be willing to sit down to talk with your child about the book after they finish the book. If you're an adult and haven't read it yet, you should read it even though it is a children's book.

Because I hate reading about animals dying, even spiders, I probably won't read Charlotte's Web again, but I was glad I reread it as an adult. It definitely still holds up and gave me all the feels. I gave this book four out of five stars.