Book Review: The Girl In The Locked Room, A Ghost Story by Mary Downing Hahn 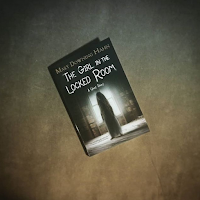 Whenever I shop by BJ's Wholesale Club, I always make sure to stop by their book section as I can usually find a book I want to read at a huge discount compared to other stores. I was disappointed to find that they had a much smaller selection than they normally do . . . they went from two tables to one table. However, I did have a moment of nostalgia when I saw a book by Mary Downing Hahn on the table with a title of The Girl in the Locked Room:  A Ghost Story. I discovered this particular author when I was in middle school and fell in love with her storytelling. So, when I saw this book at BJ's, I had to have it.

Since I wasn't the the target audience of the book, I'd give it four out of five stars because I knew what the outcome would be pretty much from the get go. The Girl in the Locked Room:  A Ghost Story was a bit reminiscent of The Doll in the Garden:  A Ghost Story, but it didn't quite have the same creepiness and suspense as the latter.  Even with that being said, The Girl in the Locked Room was still well written and held my attention, even as an adult. If you have a child that is between the ages of eight and twelve, then this book would be a perfect book for them, especially if they like suspenseful ghost stories.

Synopsis of The Girl in the Locked Room, A Ghost Story:  Because Jules' father restores old houses, her family moves around the country every year or two. When they arrive at the newest project in Virginia, Jules sees a face in an upstairs window and begins to feel uneasy. Then, the voices start to come out of nowhere and people appear and disappear in a flash. Could it be people who use to live in their new home?