Trash (Trash, #1) by Cherie Bennett and Jeff Gottesfeld follows the lifes of interns on a hip television show called Trash, and it's a bit like the Jerry Springer show but different. In the first installment, it follows the life of Chelsea, who is the daughter of a serial killer, and she is terrified that the other five interns will find out her secret.

When this was originally published, I absolutely loved this book and couldn't read it fast enough. Rereading it as an adult, one of the things that stuck out to me as a bit unrealistic was that one of the other interns turned out to be one of Chelsea's best friends from middle school, and Chelsea didn't recognize her friend because of her weight loss. It might have been different if it had been longer than four years since they had last seen each other. 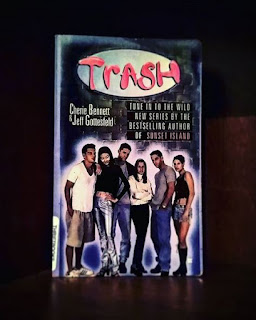 Another thing I thought was a bit unrealistic was Chelsea's crush on one of the other interns and how she dealt with their relationship when they first starting dating. She was very clingy and acted like they were in a serious relationship even though they hadn't even technically been on a date yet. As a teenager reading this section, I really didn't give it a second thought, but reading it as an adult, it really is an unhealthy view on dating.

With that being said, it is an engaging and entertaining read that still held my attention as an adult. It made me want to know where the characters are today. Something I find interesting is that the author always seems to tie in the city of Nashville to all of her books in some way. I guess that had to do with the author living in Nashville, TN at the time she wrote these books. Another tidbit I found interesting is that Cherie Bennett's husband, Jeff Gottesfeld, co-authored this book.

One other thing I noticed about the covers of all the books in this series is that the photos for the the covers must have been shot all in one day and without any alternate outfits for the models to wear. I get the photo shoot taking place all in one day because it would be more cost effective that way, but I don't get why the models wouldn't have on different outfits on the other covers in the series. In my opinion, it would have made the covers more interesting had they been in different outfits on each book in the series.

I would definitely recommend this book to kids aged eleven through eighteen. But parents may want to read the book before letting their kids read it who are on the younger side due to some more mature themes. I gave it 4 out of 5 stars.