Book Review: One for the Money (Stephanie Plum, #1) by Janet Evanovich

After recommending the book The Stranger You Seek (Keye Street, #1) by Amanda Kyle Williams and it being picked for the book discussion, I was dismayed that almost everyone hated the book. They kept comparing it to Janet Evanovich's Stephanie Plum book series, which I had heard of but never read. Determined to see what it was all about, I bought the first book in the series, One for the Money (Stephanie Plum, #1). 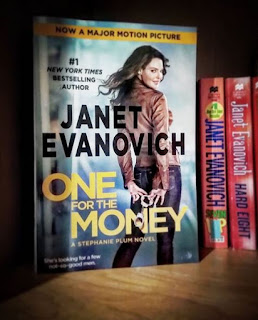 Was I ever in for a surprise . . . part suspense, part thriller, and part cozy mystery, One for the Money (Stephanie Plum, #1) was not what I was expecting . . . at all. It was definitely fun and entertaining with a few hokey parts interwoven throughout the book. Some of the character descriptions definitely made me think of the people on the reality show Jersey Shore, which I've never watched, but I do know who some of the stars of the show are (i.e. Snooki). I really liked the main character, Stephanie Plum. And, I definitely found myself liking the character Joe Morelli. There's just something that I find endearing about both of them.

One of the things that annoyed me the most about this book was that the word "boinked" was used. I can't remember exactly the last time I used the word "boinked" in reference to having sex, but it definitely was when I was in high school or my late teens. I would've preferred a different word to have been used.

With that being said, I did enjoy the book well enough, and there were enough twists and turns to keep me reading to the end. And, it was intriguing enough that I read the second book in the series relatively quick after finishing One for the Money. There really isn't anything negative I can say about this book. This is a perfect book if you want something that isn't too intense and will give you a chuckle here and there. If you don't like this book, please give the rest of the series a chance because the books do get better! I gave it three out of five stars.

Synopsis of One for the Money (Stephanie Plum, #1):  Trenton, New Jersey is where Stephanie Plum calls home. When she loses her job as a lingerie buyer at a department store, Stephanie needs money fast so she goes to work for her cousin Vinnie as a bounty hunter. Chaos ensues as she attempts to apprehend local vice cop Joe Morelli.