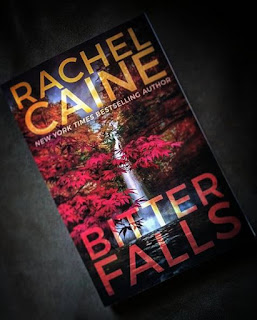 Rachel Caine did it again with Bitter Falls (Stillhouse Lake, #4). I was immediately engulfed in Gwen Proctor's world of being on the run. Like the previous installment, Bitter Falls is narrated by the main four characters . . . Gwen, Sam, Lanny, and Connor, and it definitely flows better than Wolfhunter River (Stillhouse Lake, #3). Although, I am still partial to Gwen's narration, it is refreshing to hear the voices of the other characters and understand their inner dialogue. Something I thoroughly enjoyed was the continuation of a couple of the characters from Wolfhunter River into Bitter Falls, namely Vera "Vee" Crockett. I expect to see her in at least one more book of the Stillhouse Lake book series.

The action packed fourth installment was so heart pounding good, that I had to force myself to put the book down as to not rush through and really enjoy the book. However, I stayed up entirely too late last night so I could finish Bitter Falls (Stillhouse Lake, #4) because I wasn't sure if it was going to end in a cliffhanger, and I just had to know what happened before I fell asleep.

The characters are becoming a little more defined as the series moves along. With that, we also see relationships between the different characters become more developed, especially between Connor and Sam. What makes the characters even more believable are the real life situations they are put in and handle them. One such situation is the active shooter drill at Connor's school. I don't think people really stop to think how much these drills can be psychologically damaging to a kid, so I am extremely glad that Rachel Caine explored that very real situation in Bitter Falls. Another great situation was the cult and how some people blindly follow the leader and others try to leave.

If you love a great suspenseful thriller, Bitter Falls (Stillhouse Lake, #4) is definitely worth a read. It isn't absolutely necessary to read the previous books in the series before reading this one, but I definitely recommend reading them before this latest installment. I gave this book five out five stars.

Synopsis of Bitter Falls (Stillhouse Lake, #4) by Rachel Caine:  Now as a private investigator, Gwen Proctor has been put in charge of an investigation of a missing college student. As new clues emerge, it starts to cause tension with her neighbors.