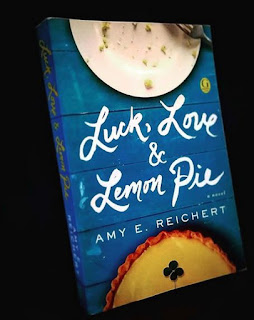 When MJ Boudreaux's husband shows up several hours late for their lunch date to celebrate their anniversary, she realizes that they're drifting apart. Her husband seems more interested in spending time at a Milwaukee casino than with her. MJ decides the perfect way for them to become closer is to take up poker, but her plan isn't working in the way she thought.

Luck, Love & Lemon Pie by Amy E. Reichert was given to me as a Christmas present by my mother. When I first started reading this book, I was a bit unsure if I was going to like it or not. However, I ended up really enjoying the story line. It featured topics such as jealousy, infidelity, divorce, friendship, gambling, and alcoholism.

At the beginning of the book, MJ admits that she and her husband Chris haven't been on the same page and decides to take matters into her own hands instead of just sitting down and having a conversation with her husband. Some people probably think this is the wrong way to handle this situation, but I'd probably handle it similarly to MJ because I don't like confrontation, and I would likely have a similar outcome because of it. However, I felt like this situation was written very realistically because it the characters became distrustful and paranoid about everything the other one was doing.

Another way that I would've behaved like MJ was how floored she was when her archenemy Tammie Shezwyski moving to her town. I would've been irritated with Tammie holding up traffic and trying to nose her way into my groups, and I would've absolutely livid with her spending time with my husband after learning the history between all of them. Again, this part was written so very realistically. Anyone who says otherwise can't have been in a similar situation.

There were parts that did drag a little, but overall, I really enjoyed Luck, Love & Lemon Pie by Amy E. Reichert and gave it four out of five stars.