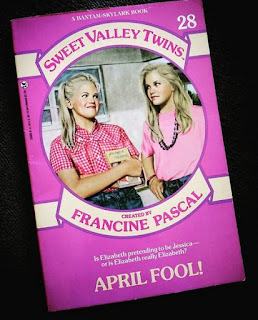 As an adult, I am having a blast rereading my way through my childhood. The most recent book I read from my childhood is April Fool! (Sweet Valley Twins, #28) created by Francine Pascal. When I read the synopsis of the book before reading it, I vaguely remembered the premise. Was I ever surprised because I ended up not remembering any of the details.

The synopsis of April Fool! (Sweet Valley Twins, #28) is that twin sisters Elizabeth and Jessica Wakefield typically switch places on April Fools Day, and the twins switching places has become legendary with their classmates.  This year, Elizabeth and Jessica decide not to switch places but pretend that they actually had. It all goes down hill for Elizabeth when she keeps getting in trouble for things that Jessica had done.

I felt extremely bad for Elizabeth because it seemed like she couldn't catch a break, but at a certain point, I realized that an elaborate scheme had to have been concocted to prank Elizabeth. It was a little far fetched in my opinion that teachers and the principal got involved, but I know that I likely ate it up as a kid. The one thing that struck me as a bit strange is during the twins home economics class, they were learning how to make a souffle. It seems like that would be a little advanced for a middle schooler, especially ones that are eleven. Yes, I know that there are some kids that can make intricate meals, but that is the exception, not the norm. When I was in middle school, my home economics class had fully functioning kitchens, but we never learned to cook anything. Instead, we learned how to cross stitch some hand towels.

All in all, the story was engaging and well written. I gave it five out of five stars and would recommend it to kids who are between the ages eight and twelve.