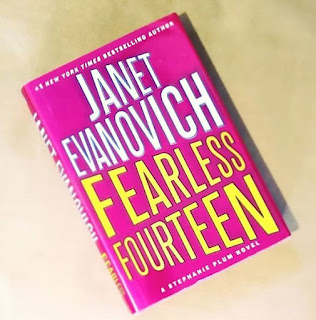 Janet Evanovich is a talented author, and her Stephanie Plum book series just keeps getting better and better with each book. Fearless Fourteen (Stephanie Plum, #14) is no exception. Although this series is technically a thriller and suspense book, it could also be categorized as chick lit and humor.

There were numerous times throughout the book that I found myself laughing out loud, which is always welcome, especially with a pandemic going on in the real world. The situations that Stephanie Plum gets herself into are always comical, and let's face it, predictable at this point. And, the way that her on again off again boyfriend Joe Morelli reacts is always humorous as well.

One character that is reoccurring in the Stephanie Plum series is Grandma Mazur, and she makes an appearance in Fearless Fourteen. However, I am glad to say it is a minor role in this book. I love the character, but there are times when I feel like she was featured too much. I can only take this particular character in small doses. Other reoccurring characters that made it into this book are Stephanie's mom and dad, Joe Morelli, Lula, Ranger, Tank, Bob (the dog), Rex (the hamster), and Connie.

Fearless Fourteen (Stephanie Plum, #14) written by Janet Evanovich is an action packed novel. Joe Morelli's cousin Dom Rizzi is released from prison after serving his time for robbing a bank and stealing nine million dollars. When his partners in crime are tired of waiting on Dom to retrieve the money, they take matters into their own hands and kidnap his sister, Loretta. While  babysitting Loretta's teenage son Mario, Stephanie Plum is in search of the kidnapper and chaos ensues.

I gave Fearless Fourteen (Stephanie Plum, #14) five out five stars because I simply enjoyed this book, and it gave me a lot of laughs. It was absolutely the best read for me at this time because it was just so much fun.