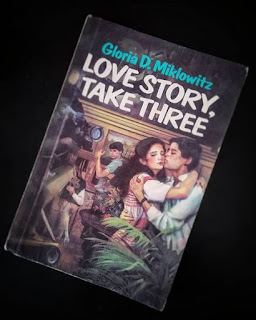 When I was a kid, there was a book club subscription service called Especially For Girls. My mom signed me up for it when I began to become an avid reader. One of the books I received was Love Story, Take Three by Gloria D. Miklowitz. For whatever reason, it ended up on a shelf in my mom's shoe closet without me reading it. Several years later, she was cleaning out the closet and came across the book and gave it back to me. I remember reading it in high school and falling in love with it. As part of my rereading my way through my childhood, I decided to read it again to see if it stood the test of time.


Love Story, Take Three by Gloria D. Miklowitz is about a teenage actress named Valerie who wants nothing more than to have a normal life like her classmates. When she starts dating basketball player Tom Gordon, Valerie lies about being an actress, which becomes harder to hide when she lands a lead role on a new television show.

A couple of things that I found interesting is that the television show that Valerie auditioned for was to be about teens falling in love and their everyday life at Beverly Hills High School. The book was published in 1986. Was it just a coincidence that the television show in Love Story, Take Three bares some similarity to the television show Beverly Hills, 90210 that premiered in 1990?  This was oddly eerie to me. The other thing I found interesting was there is another book published with a character named "Tom Gordon" . . . that book is Stephen King's The Girl Who Loved Tom Gordon. I know this last thing is completely coincidental, but it is still an interesting tidbit.