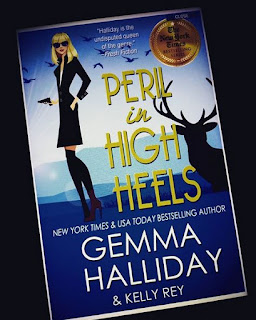 Peril in High Heels (High Heels, #11) by Gemma Halliday and Kelly Rey brings back the beloved character of Maddie Springer who is in heaven watching her best friend Dana star in a film that is an adaption of her favorite book. Things go downhill when the director is found in his trailer . . . stabbed to death with one of the prop swords.

The High Heels Mysteries book series is one of my favorite cozy mysteries. Not only does it have mystery, there is a little romance and a bit of comedy. I have to say that other than Maddie, her husband Jack Ramirez is my absolute favorite character.

What I loved about Peril in High Heels is that there were several red herrings, but I tried to figure out who the killer was early on . . . I was glad to find out that I was correct in my guess, but I couldn't quite figure out the motive. Of course, Maddie gets herself in a pickle and becomes a target herself when she starts asking the right questions around the movie set. I wasn't expecting the person who saved her to be who it was, but I loved the way she was saved as it was totally unexpected.

Since the book was set in Canada, I was worried that Maddie's husband Ramirez wouldn't make much of an appearance in it, but I was pleasantly surprised that he had plenty of story line. With that being said, I felt like there was no reason that Maddie's mom, her friend, and Marcos had to be featured in this story. They just really got on my nerves in this story.

I gave Peril in High Heels (High Heels, #11) by Gemma Halliday and Kelly Rey five out five stars because it was so engaging, action packed, and just fun.