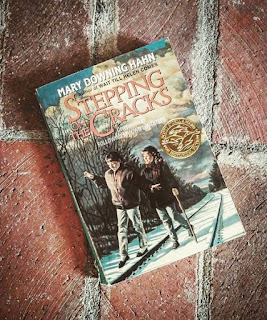 While in middle school, I discovered a book by the name of The Time of the Witch written by Mary Downing Hahn. I immediately fell in love with that book and the author. After that, I checked out every book by her in my school library. One of the books I ended up checking out was Stepping on the Cracks (Gordy Smith, #1). I didn't realize it then, but it was my first foray into reading historical fiction.

Stepping on the Cracks (Gordy Smith, #1) written by Mary Downing Hahn follows best friends Elizabeth and Margaret as they enter the sixth grade while both of their brothers are off fighting the Nazi's in World War II. Both girls are extremely patriotic and support the war, but they are more worried about their own personal war with Gordy Smith, who is the class bully. When Elizabeth and Margaret decide to get even with Gordy and his best friends, Toad and Doug, the girls uncover a secret that the boys rather them not know.

Even as an adult rereading Stepping on the Cracks, it is still a very engaging story with so many heartbreaking and very serious story lines throughout. Written in a way that children can fully grasp such serious concepts without being too graphic, it is the perfect book to educate children about bullying, child abuse, and history all at the same time. 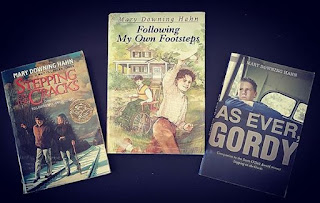 I feel like this particular book should be required reading for children and is a perfect book to tie in with history lessons about World War II. It's a great book to have an open dialogue with children about the topics above. It also does an amazing job of showing kids that everything isn't always black and white, that there are areas of gray. Additionally, the author does a nice job of letting the reader decide how they feel about those topics without trying to influence them one way or another.

Stepping on the Cracks was originally published in 1991 and was followed up with Following My Own Footsteps (Gordy Smith, #2) in 1996 and As Ever, Gordy (Gordy Smith, #3) in 1998. Mary Downing Hahn is an amazing author, and I wish teachers and librarians had introduced me to her children books. I might have become an avid reader much earlier if they had instead of trying to push books down my throat that they thought were "higher quality". I gave Stepping on the Cracks five out of five stars.