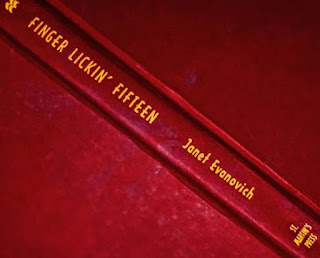 Finger Lickin' Fifteen (Stephanie Plum, #15) by Janet Evanovich is the fifteenth installment of her Stephanie Plum book series, if you don't count the four in between the numbers books she's written. In this edition, Lula witnesses celebrity chef Stanley Chipotle, who is in town for a barbecue cookoff, being murdered by two men, and now, the murderers are after her. Now, Chipolte's sponsor is offering a reward to anyone who can provide information to his murder, which leads Lula to pull in Stephanie Plum and Grandma Mazur to help her to capture the killer.

What can I say? I just become more and more enamored with the Stephanie Plum book series. It's a perfect book to read on vacation or even to just relax, regardless of the serious topics it deals with like murder and burglary. Even though a lot of the books in this series has a subplot, Finger Lickin' Fifteen seemed to have more of a subplot, which had me wanting to stay up into the wee hours of the night. And, the fart jokes continued from the previous installment, Plum Spooky (Stephanie Plum, #14.5), which is just what I needed, and they made me actually laugh out loud. I also love the fact that Evanovich follows the same formula because sometimes I just need to read a book where I know that there is going to be a "happily ever after".

There are a few things I disliked about Finger Lickin' Fifteen (Stephanie Plum, #15) by Janet Evanovich is that Stephanie and Morelli are on the "off again" part of their on again, off again relationship. At this point, I seriously doubt that they will ever get married, but I really want them to say, "I do". Another thing that I disliked is Lula's dieting . . . she always goes on these weird diets and complains that she's not losing any weight. I guess Evanovich is trying to make Lula more relatable since so many people tend to "yo-yo diet", but it just frustrated me for whatever reason . . . I guess I'm tired of hearing about her diets. Lastly, I am annoyed that Stephanie is always just "this close" to apprehending her skip. Can she please get somewhat better at her job?!?!

Even with my complaints, I still LOVE Finger Lickin' Good (Stephanie Plum, #15) by Janet Evanovich. I gave it four out of five stars, and I can't wait to see how the series plays out!