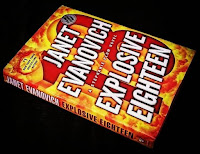 Explosive Eighteen (Stephanie Plum, #18) by Janet Evanovich finds Stephanie Plum returning home from a dream vacation in Hawaii, but it was everything but a dream. To top things off, one of the passengers is snoring loudly and her seatmate never got back on the plane from their layover in Los Angeles, CA. Upon her arrival in Trenton, Stephanie finds a random photograph in her bag and learns that her seatmate that never returned was murdered. Now, everyone, including the FBI, is trying to retrieve the photo from Stephanie.


When I first began reading Explosive Eighteen, I wasn't sure if I was going to enjoy the book or not, but the more I read, the more I enjoyed it. So much so, I spent several hours doing nothing but reading, which was a nice change of pace for me.

Things I absolutely loved about this installment of the Stephanie Plum series was the story behind why the Hawaii vacation went so wrong and caused Stephanie to go home a day early. I love the comic relief Janet Evanovich never fails to provide, and I know that the book will be wrapped up neatly, which is something I need with the pandemic and political divide in the United States. You've heard of comfort food, right? Well, I consider these comfort books.

What I had hoped for was a book that focused on Stephanie on vacation with either Morelli or Ranger . . . my pick being Morelli. I was disappointed that this didn't happen and felt like it was a missed opportunity. Based on the back story of why Stephanie came home early, it would have made for a great story that was a bit different from the usual.

I gave Explosive Eighteen (Stephanie Plum, #18) by Janet Evanovich 5 out of 5 stars because it was like going home again . . . I love knowing that even though I may not like everything that happens or characters may get on my nerves that Janet Evanovich can take my mind off of every day worries and give me an escape from reality.