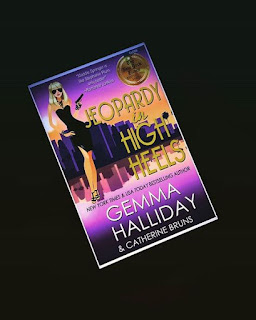 Jeopardy in High Heels (High Heels, #12) is the latest installment of the High Heel Mysteries book series. Maddie Springer is thrilled to learn that her hairdresser-to-the-stars stepfather, Fernando, has been selected to appear on a celebrity edition of Jeopardy! But, when another contestant, bagpipe rapper Doggy Z, dies after the taping of the show, a tabloid reporter points the finger at Fernando and threatens to expose his secrets.

Gemma Halliday never fails to disappoint, and Jeopardy in High Heels was no exception. From the get go, I was sucked into the storyline and couldn't wait to find out "whodunit". And, I can honestly say that I didn't guess who the killer was, which is refreshing to say the least.

Another thing I enjoyed was that the television game show Jeopardy and Alex Trebek were incorporated into the plot because it's one of my favorites game shows to watch. With that being said, I found myself saddened that Alex Trebek died in real life while I was reading the book.

This particular series is one of the better cozy mystery book series in my opinion as it has a bit of everything in it . . . romance, comedy, and of course, mystery. It's also a comfort read for me because it's always like "going home again". I gave Jeopardy in High Heels (High Heels, #12) five out of five stars.