Book Review: A Catered Murder (A Mystery with Recipes, #1) by Isis Crawford 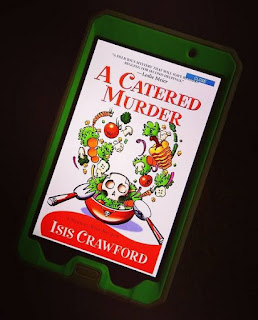 A Catered Murder (A Mystery with Recipes, #1) by Isis Crawford opens with Bernadette Simmons moving back to New York from Los Angeles, California to work for her sister Libby's catering business called 'A Little Taste of Heaven'. They get hired to cater a high school reunion where the guest of honor is Laird Wren who writes vampire novels. But when he keels over and dies, Libby becomes a suspect.
This cozy mystery series has potential to be a great series. I enjoyed the storyline well enough to keep reading, and it kept me engaged. The main characters were likable and had some good character development.
However, the thing that annoyed me about A Catered Murder by Isis Crawford is that there were some poor word choices in my opinion. It seemed as though the author had a thesaurus sitting next to her as she wrote and would randomly throw in a more complex word. Although the reader could figure out what the word means, the sentence structure didn't flow as well. It also seemed like the author was using big words just for the sake of using big words when a simpler word would have sufficed in many of these instances. Furthermore, there were a few instances where I wasn't sure who was speaking, and I had to reread the exchange a couple of times.
All in all, I enjoyed A Catered Murder (A Mystery with Recipes, #1) by Isis Crawford and gave it three out of three stars. If you liked this book, I recommend reading Killer Cupcakes (Lexy Baker, #1) by Leighann Dobbs.
Follow Us On Social Media