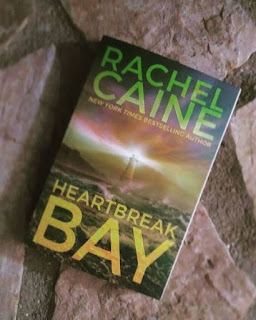 In Heartbreak Bay (Stillhouse Lake, #5) by Rachel Caine, a car is found submerged in a pond with twin girls still strapped in their car seats and their mother nowhere to be found. Detective Kezia Claremont of Norton requests the help of private investigator Gwen Proctor, who has recently moved to Knoxville, Tennessee. As the threats mount against both women, they know they have to fight to the end to save their families.

I absolutely loved this most recent installment in the Stillhouse Lake book series, and it makes me extremely sad that this is the last book since the author passed away from cancer late last year. With that being said, I wonder if she had help with writing Heartbreak Bay because there were a couple of times a sentence didn't quite sound like her writing style. However, even with those few lines, the writing still felt like Rachel Caine wrote it, so I guess it could have been the editing.

The character development with Laney, Connor, and Kezia was remarkable. Even Vee had some growth, which was nice to see. It's also gratifying to see a book series with several strong women characters, not just one. And, I love the fact that they're shown in a good light.

I tried to take my time reading the story instead of rushing through it like I did with the other books in the series. But it was so hard to do so because I was sitting on the edge of my seat the entire time. I kind of figured out who the bad guy was, but there was a twist with the identity that I didn't see coming, which is why I say I kind of figured out who it was. I won't say more as to not ruin it for everyone.

You can read this book as a stand alone, but I highly recommend reading the other books in the series first. I gave Heartbreak Bay (Stillhouse Lake, #5) by Rachel Caine five out of five stars.