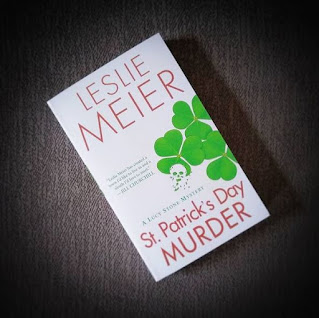 In Tinker's Cove, Maine, the dead body of grizzled barkeep, Dan Malone, is found in the town's harbor. Reporter Lucy Stone takes it upon herself to learn more about Malone and who might want him dead and suspects local musician Dave Reilly and local contractor Brian Donohue. While the gossip mill going wild, Dylan Malone, Dan's younger brother, arrives in town to help direct the local church's St. Patrick's Day annual play, which compounds everything in Leslie Meier's St. Patrick's Day Murder (A Lucy Stone Mystery, #14).

What can I say about this novel? I love it! Leslie Meier has definitely hooked me on this series, and I can't wait to read the other books in the series. The characters are likable, with a few exceptions of course, and the storyline is engaging. And, I honestly have to say, I didn't figure out the murderer. I had quite a few wrong guesses! I've been reading this series out of order, but that hasn't really detracted from anything, and I think I'm going to start reading the rest of the books in order.

There weren't really too many negative things that I could say about St. Patrick's Day Murder (A Lucy Stone Mystery, #14). I found one typo where the incorrect character's name was used, which made me reread several lines over and over to see if I read it incorrectly. I didn't. And, even though this book was published in 2008, it surprised me that the main character, Lucy Stone, used a Rolodex to look up a phone number at work instead of just looking it up on the internet.

Four out of five stars is what I gave Leslie Meier's St. Patrick's Day Murder, and I can't wait to read the rest of the books in the series. If you enjoyed this book, I'd recommend Spellcast (Maggie Graham, #1) by Barbara Ashford.