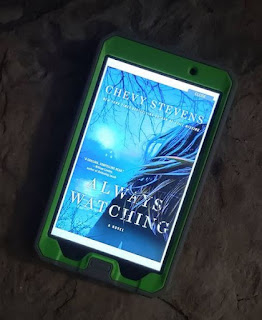 Always Watching by Chevy Stevens introduces us to Nadine Lavoie, a doctor at a psychiatric hospital. After counseling a new patient named Heather, Nadine starts recalling repressed memories of when she lived at a commune at a child and realizes that everything is not as it seems.

When I first started reading Always Watching, I wasn't sure I was going to enjoy this particular storyline.However, once I got about a third of the way through the book, it picked up a lot. This book of Chevy Stevens ended up being one of my favorites by this author.

Although some of the plot was predictable, there were a couple of plot twists that I didn't see coming, and after those twists were revealed, they fit in well with the story and made a lot of sense. There were quite a few characters that I didn't care for, but once a few things were revealed about those characters, I ended up liking them.

This book is a definite must read for most people, but it may not be for everyone as it contains some sensitive topics such as alcoholism, drug use, suicide, molestation, and cults. I gave Always Watching by Chevy Stevens five out of five stars. If you enjoyed this book, you may enjoy The Girl on the Train by Paula Hawkins.