Book Review: Not A Happy Family by Shari Lapena 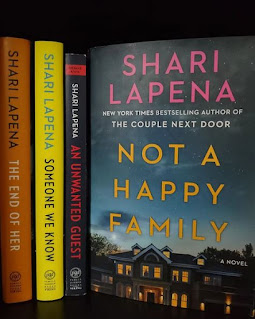 Not A Happy Family by Shari Lapena introduces the reader to the ultra rich Merton family in an upscale neighborhood in Brecken Hill located in upstate New York. However, all the money in the world can't protect Fred and Sheila Merton from being murdered, and their three children are all a person of interest in their deaths.

Whenever I learn that Shari Lapena publishes a new book, I know that that I'll read it without even knowing the synopsis, and it wasn't any different when I learned of her latest book Not A Happy Family. I jumped right into it and was pleasantly surprised with the storyline.

Reminiscent of the movie Knives Out, I enjoyed all the suspense and trying to figure out who the murderer was in Not A Happy Family. However, there came a point that the story became a bit sluggish and drawn out. With that being said, it was still extremely intriguing, and I suspected everyone at one point. I narrowed it down between two different characters and wasn't sure which of them was the culprit until the end. Speaking of characters, there weren't very many likable characters in this book and the few that were likable where very minor.

I gave Not A Happy Family by Shari Lapena four out of five stars because it did become slow-moving at one point, but I thoroughly enjoyed it regardless of that. If you liked this book, I recommend Never Knowing by Chevy Stevens.