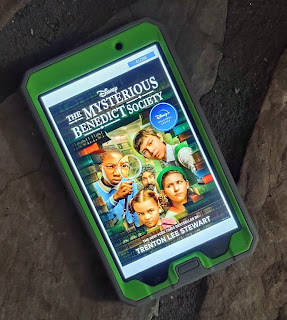 Reminiscent of The Lion, The Witch, and The Wardrobe by C.S. Lewis and Miss Peregrine's Home for Peculiar Children by Ransom Riggs, The Mysterious Benedict Society is an intriguing read that caught my attention from the very beginning. However, there are some slow parts in the middle that could have been edited out, which is my only complaint. The ending is wrapped up nicely with only a few loose ends so this book can be read as a stand alone. However, I will read the next book in the series.

What's cute about the book is that it has a quiz at the end. Your results will tell you which main character you are most like. After taking it, my result revealed that I am most like Reynie, who was my favorite character. Another cute thing about the story is that there is a "letter" from Mr. Benedict at the end as well saying that his first name was revealed in the book. However, I still don't know what it is.

Don't let the fact that The Mysterious Benedict Society is a children's book deter you from reading it as an adult because you'd be missing out on a great story. I gave it four out of five stars. If you liked this book, I recommend reading The Lion, The Witch, and The Wardrobe by C.S. Lewis.