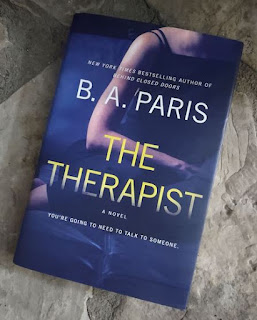 The Therapist by B.A. Paris is about a couple named Alice and Leo moving into a gated community called "The Circle", where nothing is as it seems. When Alice learns of her new home's secret, she starts investigating the previous owner named Nina who was a therapist. However, none of the neighbors want to talk about her.

When I bought this latest book by B.A. Paris, I knew absolutely nothing about the storyline. I got it solely based on the fact of who wrote it, and I was not disappointed in the least. The Therapist sucked me in from the very beginning, and I think I may like this book even more than I did The Breakdown.

Up until the last fifty or so pages, I thought one person was the murderer, and then, I started thinking that it was a different person. I was correct in my second guess, and I don't know how I let myself be led astray for so long. The author did a great job of throwing suspicion on all of the neighbors at one point or another. With that being said, I did think there was more to next door neighbors, Lorna and Edward. I thought they might be Leo's parents since he was estranged from them, but you'll have to read the book for yourself to see if I was right or not.

I enjoyed the fact that I could escape into The Therapist. It was a lighter read without too much gore and horror, which is nice for a change. Five out of five stars is what I gave The Therapist by B.A. Paris. If you enjoyed this book, I recommend That Night by Chevy Stevens.