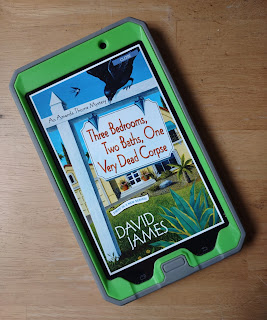 Three Bedrooms, Two Baths, One Very Dead Corpse (Amanda Thorne Mysteries, #1) by  David James takes place in Palm Springs, California. Realtor Amanda Thorne is having the worst morning. Her car won't start, so she decides to ride her bike to her showing, only to crash into a cactus. Her day gets worse when she finally arrives at her listing to find a dead body in the house.

This book, although entertaining enough, fell a bit flat for me. I liked the book well enough to continue reading to find out what would happen. However, there were quite a few things that bothered me.
Amanda Thorne's responses to certain situations were a bit of a stretch in believability as she was overly dramatic and emotional. I feel like the main character shouldn't have been written from a woman's perspective. On top of that, the amount of cursing in Three Bedrooms, Two Baths, One Very Dead Corpse was over the top, which typically doesn't bother me. However, I felt like it could have been done better. I didn't care for the way the Lithuanian grandmother was written or the obvious disdain for people who were into new age practices.
Despite my complaints, I will give David James another chance and read the next book in the series. I gave Three Bedrooms, Two Baths, One Very Dead Corpse (Amanda Thorne Mysteries, #1) 2.5 stars out of 5 stars but rounded it up to 3 stars on Goodreads.com. If you enjoyed this book, I recommend The Bounty (Fox and O'Hare, #7) by Janet Evanovich and Steve Hamilton.
Follow Us On Social Media