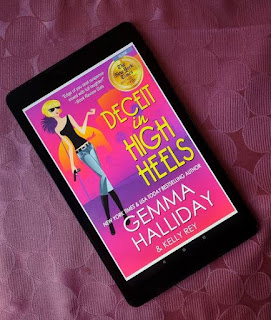 Maddie Springer is attending friend Ricky's reading for the Hollywood Psychic television show. Right after the medium drops a bombshell about the death of Ricky's mother, she dies herself before anything else can be revealed. With two mysteries needing to be solved in Deceit in High Heels (High Heels, #13), who can blame Maddie for wanting help solve them for her friends?
Deceit in High Heels (High Heels, #13) by Gemma Halliday and Kelly Rey is the latest book in the famed High Heel Mysteries series, and this book was even better than the last. I don't know how the author keeps churning out such engrossing and entertaining books in this series. Even though this book kept the same formula that the others do in the series, it doesn't seem formulaic or stale. It's extremely entertaining, and I didn't want to put the book down.
I love the dynamic between Maddie and her husband, and I wish he had been in the book even more than he was because he is one of my favorite characters. The bonus was that Maddie's mom and Mrs. Rosenblatt had minimal roles in Deceit in High Heels. I get tired of those characters very easily. I loved the introduction of Jerome. You'll have to read the book to see why. I didn't figure out who the killer or killers where. Although, I did suspect one person towards the end, but if I had paid attention to the clues more closely, I would have figured out who did it much earlier. Gemma Halliday and Kelly Rey did a great job of constantly keeping you guessing.
The plot line of the psychic being killed was quite a believable one to me because you either believe in them or you don't. And, once the killer was revealed and the reasoning behind the killer, it became that much more believable. I don't know why I didn't pick up on some of the clues earlier. It was a total face palm moment for me.
Five out of five stars is what I give Deceit in High Heels by Gemma Halliday and Kelly Rey. I can't wait for the next installment in the series. If you enjoyed this book, I recommend The Book Club Murders (Oakwood Mystery, #1) by Leslie Nagel.
Follow Us On Social Media