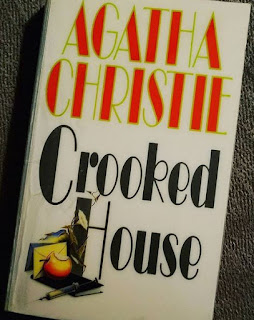 With Crooked House coming out in theaters soon, I knew I had to reread the book before watching the movie, and I was glad that I did. I didn't remember anything about the book going into it, but as I read, bits and pieces started coming back to me. Reader beware . . . this mystery is one of Agatha Christie's stand alone books that is not part of any of her popular detective series . . . so no Hercule Poirot & his little gray cells, no Miss Marple, and no Tommy & Tuppence. Agatha Christie's Hercule Poirot series is my favorite so at first I was a bit disappointed that he wasn't in this particular book.

The book begins with the narrator, Charles Hayward, meeting Sophia Leonides in Egypt during the European War, which we know better as World War II. Charles instantly falls in love with Sophia but since it is too soon for him to propose to her, they make plans on meeting in England once the war is over to see if they are both still available and interested in each other. Fast forward two years, Charles comes home to London and sends a telegram to Sophia to meet for dinner. While waiting for a response, he reads the newspaper only to find the obituary of Aristide Leonides . . . the grandfather of Sophia. Everyone in the family is a suspect, even the grandchildren.

Don't be mislead with the opening chapters. This is not a romantic mystery in way, shape, or form. It is a mystery through and through, but you shouldn't expect this to be categorized as a thriller either, at least not in terms of today's standards. It is a straight forward detective mystery. With that being said, in all of her books, everyone is a suspect and has you guessing the entire time. She does give you clues along the way, but I have yet to figure out who the killer is in any of her books, including this one. In fact, when I read other mysteries, I always try to think back to an Agatha Christie book and pull from my knowledge of her books in trying to guess who the killer is.

Agatha Christie does a phenomenal job developing the characters, most of which I disliked immensely for one reason or another. The most likeable characters were Charles Hayward, Sophia Leonides, Josephine Leonides, and Edith de Haviland, but Edith ended up being my favorite character in the end. You'll have to read Crooked House to find out why as I'd spoil the book if I told you why.

If you don't read the book, then you should definitely check out the new Crooked House movie due out in theaters in December 2017, at least in the United States. Personally, I am looking forward to seeing it and am extremely excited that Gillian Anderson from The X-Files was one of the actresses in the movie. I can't wait to see how she does.