Book Review: It Ends With Us by Colleen Hoover 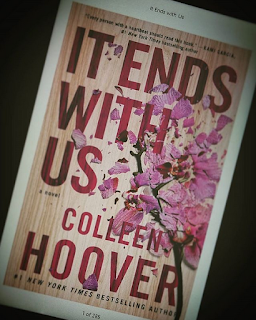 I belong to a couple of book clubs, and one of them reads a bit of everything. It's this book club that chose It Ends With Us by Colleen Hoover as one of three book selections for the December Book Club Meeting. Normally, we only have two selections, and we can choose to read one of them or both of them. I decided to go with the aforementioned book because it takes place in Boston, Massachusetts, and Boston is one of my favorite cities to visit.

With that being said, I wasn't too sure I'd like this book because we had read another one of Colleen Hoover's books, and it was just okay. Anyways, despite the heavy topics in It Ends With Us, I ended up loving the book. Topics included spousal abuse, accidental death by gun, and homelessness. It does include some graphic scenes, so it may be too upsetting for people to read if they've gone through any of this in their life. At the very end of the novel, the Collen Hoover explains that the book is semi-autobiographical, which I was wondering about as I read the novel. I am lucky that I haven't experienced any of this in my life, but it did sadden me to know that people do go through these things in life.

One of my favorite things of the book, other than bringing light to some serious topics, is that a couple of the characters tell naked truths. Naked truths are where you tell the honest, brutal truth, no matter what. I think if people were more honest with each other, people would be somewhat happier.

Some of the characters were very well developed and some weren't quite as developed. Despite this, I fell in love with all of the characters and became emotionally attached to them, even the ones who turned out to be not so good. I hope she writes a sequel to it because I just have to know what happens with the characters.

Synopsis:  After graduating college, Lily Bloom moves from a small town in Maine to Boston, Massachusetts to work in marketing. One night, she finds herself sitting on the roof of a nearby building after having a bad day when Ryle Kincaid appears on the roof. Months later, Lily decides to start her own business only to run into him yet again and a romance begins to blossom.