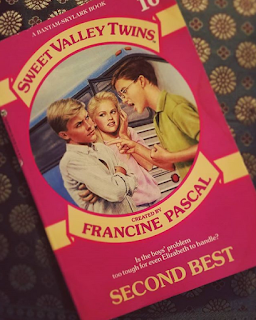 In an effort to meet my reading challenge on Goodreads.com, Second Best created by Francine Pascal is one of four books I read in the Sweet Valley Twins book series. It is the sixteenth book in the series.

Growing up, these books targeted kids eight years old up to twelve years old and in third grade through seventh grade. However, I think they have changed the target ages to younger age groups because children are learning to read much earlier and growing up a lot faster than when I was kid.

Second Best (Sweet Valley Twins #16) deals with seventh grader Dylan McKay feeling like he is second best to his younger brother Tom McKay, who is in the sixth grade. Tom is the popular kid who does well at everything he does . . . making friends, playing sports, and getting good grades. When Dylan learns that he hasn't been invited to Kimberly Haver

The first thing I have to mention that I never noticed until I reread Second Best is that one of the main characters in this book, Dylan McKay, shares a name with a very popular character in the television show Beverly Hills 90210, which came out only a year or two after this book was published. What makes it even more interesting to me is that the first time I read Second Best was when I was watching the popular television show, and I don't think I ever noticed this.

Something I don't understand is how Tom and Dylan's parents realize how unhappy Dylan is and how he is acting out. One of major ways Dylan acts out is by trying to fist fight his brother and ends up punching Tom in the nose causing it to bleed. The other way he acted out is by running away. I know that these things happened during and right after school, but he had to be acting out at home too. As a kid, I know I didn't give this a second thought.

Usually, there is only a lesson in each book for kids to learn, but in this case, I feel like there is a lesson for parents too. The lesson for kids is not to judge people before getting to know them. The bigger lesson is for parents to pay attention to their kids acting out, getting to the bottom of the problem, and fixing it.

The kids lesson was resolved, but we don't know if the parents ever did anything on their part to rectify the situation. However, I think that solving the bigger issue would be too deep for the target audience and the reason why the author didn't get into that end of it.

All in all, I enjoyed reading this children's book, even as an adult. I recommend both kids and their parents reading it and discussing it afterwards.