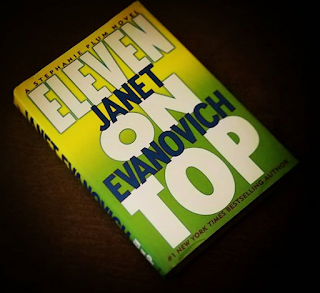 A bit different from the ten previous books in the Stephanie Plum Series, Eleven On Top by Janet Evanovich is by far my favorite one by far . . . at least as of right now. The main character, Stephanie Plum, is a bounty hunter and has finally decided that she has had enough danger in her life. Stephanie quits on her cousin Vinnie, who runs the bails bonds office she works for in Trenton, New Jersey. As luck would have it, danger follows Stephanie from job to job, so Ranger offers her a desk job at his security company called Rangeman.

I think one of the reasons I liked Eleven On Top so much is because it was changed up a bit from Stephanie always getting into the comical, over the top situations as a bounty hunter. Another reason is that Janet Evanovich is finally revealing more information on Ranger and making him seem more like a person. We also get to see Joe's personality a bit more and see how much he really does love Stephanie. He doesn't seem like such an overbearing caveman like he did in previous books in the series. Joe is way more likeable now.

One of my favorite parts of the book is that after giving up sugar, all Stephanie can think of is having sex. Joe Morelli, her sex fiend boyfriend, can't keep up with Stephanie and has to sleep in another room because of it. And, I am beyond relieved that she stops herself from sleeping with Ranger because I really want her to marry Joe. However, since I already know that the series is on book number 24, I'm not expecting that Stephanie and Joe will get married any time soon.


It is an amazing series to read for fun and escaping every day life. A definite must read. Each book sucks me into the story line, and I can't wait to finish them.