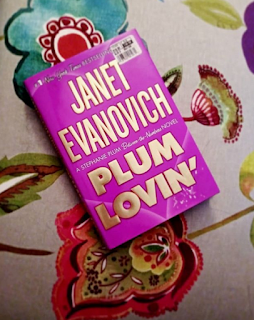 In this edition of the Stephanie Plum Between-the-Numbers novel Plum Lovin', Diesel pops back into Stephanie's life to make a deal with her. He'll help her find Annie Hart, Stephanie's most recent bond enforcement job. The catch? She has to help Diesel play matchmaker for Annie Hart, who is a relationship specialist and is missing, and he knows where she is. Why? Diesel has promised Annie he will work on five of her cases, and he isn't good at relationships.

Plum Lovin' by Janet Evanovich is the second between the numbers books and is more of a novella at just under 200 pages. And, I enjoyed it a lot better than the first Between-the-Numbers book, Visions of Sugar Plums because it had less paranormal elements in it. Don't get me wrong, I love paranormal just as much as the next person, but it just doesn't seem to fit in with the Stephanie Plum series. I would be completely fine if all of the paranormal was taken out though because that isn't what I want when I pick up this series.

Another thing that I don't particularly care for is that the character Diesel is only in the Between-The-Numbers books, at least so far. It seems a little random to bring in a character that isn't in any of the main series books. And, I don't particularly care that this produces a third love interest for Stephanie Plum, especially since he isn't in the main books. Aren't two love interests enough?

All in all, I enjoyed Plum Lovin', and would recommend it to other people to read. However, it is necessary for people to read this in between Twelve Sharp and Lean Mean Thirteen because there is an important story line that takes place in this book that you'd need to know before reading the thirteenth book in the series.I gave Plum Lovin' four stars out of five because it was a lot better than Visions of Sugar Plums, but realistically it was more of a 3.5 stars out of five.