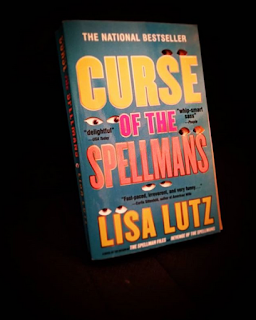 Much to my surprise, I won a copy of Curse of the Spellmans by Lisa Lutz on a First Reads Giveaway on Goodreads.com in return for an honest review. It was one of the first books I ever won on the site. Super excited that I'd won this book, I picked up the first book in the series The Spellman Files off of my bookshelf so that I could read it before I got the book I won in the mail from the publisher. (Typically, I won't read a book in a series unless I have read all the ones that came before it.) It was kismet that I had found the first book in the series at Barnes & Noble in the bargin bin!

Curse of the Spellmans takes place in San Francisco, California and is about a family of private investigators. In this installment, Izzy Spellman has been arrested four times in three months and has to be bailed out of jail by Morty, her aging lawyer because her parents (and managers) refuse to do so. While Izzy is busy surveying her next door neighbor, her sister Rae is busy stalking Henry Stone, Izzy's best friend who just happens to be a cop. On top of that, a copycat is vandalizing Mrs. Chandler's lawn display, and it's eerily similar to what Izzy and her best friend had done in 1991-1992.

This isn't your typical mystery book . . . so don't be surprised when it doesn't read like an Agatha Christie or P.D. James book. With that being said, it is a terrifically funny mystery that had me laughing out loud in several places. Something that sets this series aside from others is that the author has footnotes throughout the book where she goes into further detail. It's done quite well and doesn't detract from the experience at all. As far as character development, I think Lisa Lutz did a great job in giving us insight to the characters personalities. I felt like I really knew them.