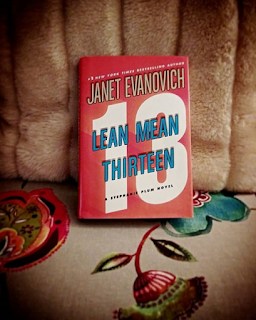 In Lean Mean Thirteen, written by Janet Evanovich, Stephanie Plum does a favor for Ranger by planting a bug in her ex-husband Dickie Orr's office. In the process of doing this, Stephanie sees one of their wedding presents, a clock, on his desk and tells him it is now hers. She then sees a picture of her arch nemesis, Joyce Barnhardt, on Dickie's desk and goes ballistic . . . punching and hitting him (and more). Unfortunately for Stephanie, the whole office sees her do this, so when Dickie goes missing, she's the number one suspect in his case.

Overall, I enjoyed this book because it featured Ranger quite heavily, but I am growing tired of him always saying how he is barely keeping control of himself from having sex with Stephanie. I'd really like to see Stephanie's character finally get over her commitment phobia and settle down with Joe Morelli, her on again off again boyfriend. Morelli isn't in it too much and that was quite disappointing to me because I love the interactions between the two. What was nice is that is seems that Ranger and Morelli seem to come to a tentative agreement to like each other as people and that both of their focus is to keep Stephanie alive. Something else that I was glad to see was that it did have continuity from her between the numbers book Plum Lovin' (Stephanie Plum, # 12.5).

All in all, it was still funny and enjoyable, and it let me forget about the real world while I read Lean Mean Thirteen. There were even a couple of laugh out loud moments, and it takes a lot to make me laugh. What is even nicer is that it kept my attention the entire time unlike other books I've read. I gave it 4 out of 5 stars. Now, on to another book!