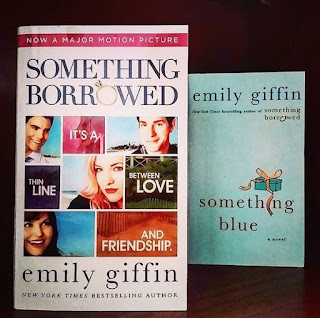 New York Times Bestselling Author Emily Giffin's Something Borrowed is a fast paced, heart breaking story about a hard working lawyer in Manhattan, Rachel White, who is the maid of honor to her best friend Darcy. Since they were little kids in elementary school, Rachel has always been the Watson to Darcy's Sherlock, but that changes when Rachel confesses her true feelings to Darcy's fiance, only to find out the feeling is mutual. As Darcy's wedding approaches, Rachel knows she has to make a hard choice . . . steal the man away from her best friend or cut him out of her life.

When the movie trailer came out for Something Borrowed, I immediately knew I wanted to see the movie. I had no idea it had been adapted from a novel (and not to mention I hadn't ever heard of the author) until I was at a book club meeting and one of the members was talking about the book and the author, and several other of the members jumped in on the discussion. I ended up enjoying the movie so much that I decided to read the book and was pleasantly surprised that there was a sequel, Something Blue, but it wasn't adapted to the big screen, which is a little surprising to me, but I know there were probably contributing factors to it. 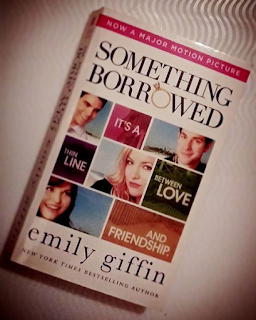 The biggest issue I had with Something Borrowed is that the major theme had to do with cheating and making it seem like it is okay. It isn't okay and never will be okay. But let's be honest, it is something that happens in every day life. Here's the thing though, it was written in such a way, that it has you pulling for Rachel to get the guy. Why? The best friend, Darcy, is so self centered, selfish, and completely unlikable that you don't want her to end up with Dex. Darcy is mean girl personified. If you've lived under a rock these past 12 years and don't know what happens, you'll have to read the book or watch the movie.

Emily Giffin did a fantastic job in making you understand how someone could get into a situation like this and feel all the emotion that goes with it on both sides . . . guilt, anxiety, nervousness, anger, etc. It felt like something that could really happen in real life. It just goes to show you what good writing will do.

Despite the off putting topic, it was a light read and hard to put down and made me want more. It falls in the chick lit genre and is a good book to take with you on vacation, especially to the beach. I gave it four out of five stars.