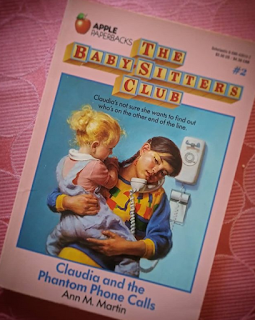 The girls of The Baby-Sitters Club are no strangers to having weird things happen to them since they've started their club. However, nothing has been as weird or spooky as getting mysterious phone calls while on their jobs. Whenever they receive these calls, there is no one on the other line. Claudia, who loves reading mystery books, is determined it's the Phantom Caller who is a jewel thief operating in Stoneybrook.

It did have a happy ending when they found out the prank calls were done by none other than Alan Gray. He had a crush on Kristy and wanted to ask her out to the Halloween Hop but didn't have the nerve to do so. Many people think that this particular book gives girls an unhealthy message about boys liking girls . . . that it tells girls that if a boy likes you that he'll be mean to you and tease you. I didn't have that take away from the book. Alan Gray was a nuisance to the girls ever since they were little, but it was more that they were annoyed by things he did that weren't necessarily mean. When he made a smart ass quip to the teacher about Kristy in the fifth grade, Kristy was the one to play a prank on him. That of course meant war between the two. I really wish adults would stop reading too much into something that is kids being kids in my opinion.

The main theme in Claudia and the Phantom Phone Calls is responsibility. After getting several phone calls and then seeing a prowler outside the house, Claudia calls the police. The underlying theme is that in order for things to change, you must make them. Don't wait for other people to make those changes. I gave this book five out of five stars.