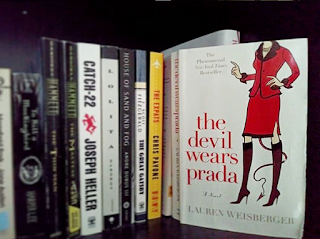 As a recent college graduate, Andrea "Andy" Sachs moves to New York City with her friend Lily and is trying to find a job in publishing. After sending out her resume all over the city, she finally lands a position that "a million girls would die for" as a junior personal assistant to Miranda Priestly, editor in chief of the fashion magazine Runway. As Andy becomes entrenched at Runway, her personal life and relationships suffer.

When the movie The Devil Wears Prada came out in movie theaters, I knew I had to watch the movie, and I wasn't disappointed. I loved it so much that I wanted more and turned to the internet to see if there was a sequel planned. There have been rumors that their would be a sequel, but it seems as though the original cast has no desire to film it as they believe nothing could top the original film. However, much to my surprise, I found out that the movie was based on an actual book, so of course, I bought the book.

Reading the book definitely answered some lingering questions I had from the movie. That was definitely a plus for the book. (I understand that when adapting a book to a movie, they can't include everything, but there shouldn't be any lingering questions about the plot of a movie.) Something that surprised me was that there were a lot more characters in the book than in the movie . . . the movie had combined some of the characters and totally removed others from the book. All in all, I was extremely disappointed in the book The Devil Wears Prada. I had trouble pushing myself to finish reading it. I'd recommend skipping the book altogether because of it being so painfully boring in places. This is one of the few times where I actually think the movie was better than the book.

Because I found it so boring, I was hesitant to read the sequel, Revenge Wears Prada, when it came out, but I did read it . . . you'll have to tune in soon to find out what I thought about the sequel. With that being said, I don't see myself reading anything else written by Lauren Weisberger. Maybe one day I'll give her another chance. Overall, I gave the book, The Devil Wears Prada two out of five stars.