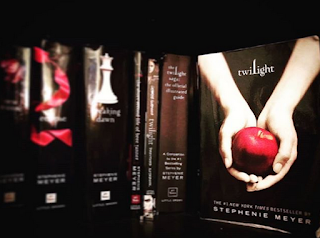 The year was 2008, and it seemed everywhere I went, I heard people talking about the book Twilight by Stephenie Meyer. The movie based on the book was finally in theaters, and on a Saturday afternoon, I finally decided to breakdown and buy the book to see what all the fuss was about. That night, I started reading the book and stayed up until the wee hours the next morning. When I woke up, I had to buy the rest of the books in the series so I could immediately start reading the next one. I was absolutely enchanted by the story.

In the many book discussions I've had with different people, they say how poorly written Twilight is, but in the same breath, they add that they were sucked in by the story line. This always blows my mind because if it were so poorly written, then they wouldn't have been as engaged as much as they were . . . at least in my opinion. Will Twilight ever be considered true literature and be in the same league as the classics? Probably not. With that being said, any story that is as engaging as Twilight is not poorly written if it transports you to another world.

My teenage self could totally relate to Isabella "Bella" Swan because I didn't date a lot in high school, and I was a total klutz. And, on top of that, what tween or teenager hasn't had a crush on someone and obsessed about them? I seem to remember that when my friends started dating their boyfriends seriously, all they wanted to do was be around them. It just seems to me that adults reading Twilight seem to forget what it was like being a teenager. I don't know . . . maybe my experiences were different growing up?!?!?!

The only negative thing I can say about it is that it seemed liked a lot of the ideas were taken from previous vampire books like Anne Rice's Interview with a Vampire and L.J. Smith's The Vampire Diaries. I've read several different series about vampires, and none of them really felt like they were that similar to the others quite like Twilight did especially with the description of vampires themselves.

I absolutely was entranced with Stephenie Meyer's Twilight, and I give it five out of five stars. Recommended to those who love horror, mystery, romance, and action.

Synopsis of Twilight:  After moving in with her father in the small town of Forks, Washington, Isabella "Bella" Swan falls for the mysterious Edward Cullen. Bella soon finds out that things aren't quite what they seem.