Book Review: After You (Me Before You, #2) by JoJo Moyes 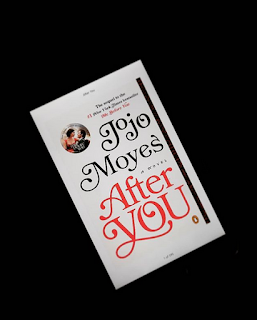 After You (Me Before You, #2) by JoJo Moyes picks up approximately two years after Me Before You (Me Before You #1) ended. After Louisa Clark spent time abroad, she moves back to England and bought a flat in London. Estranged from her parents and still depressed after Will Traynor's death, she goes to the roof of her building to think and ends up falling off it. After recovering at her parents house, Louisa returns back to her flat in London and finds the surprise of her life.

There was a lot of things that I loved about the book and just a few that I didn't like. I loved the fact that it largely showed how Louisa was struggling with Will's death and was having trouble living life to its fullest. So many people struggle after the loss of a loved one, and it seems like others expect them to be whole again relatively quickly. But, I also wanted to shake Louisa at some points because she so obviously needed help with her depression and wasn't doing anything about it . . . that is until she joined the "Moving On Support Group". Even then, she seemed a bit hesitant to discuss what happened. However, I was glad that she opened up a bit more, and it eventually did help Louisa deal with her depression. Moreover, I think that her helping Lily get her life back on track helped Louisa have purpose again and helped with her depression because as messed up as Lily was, she was a very blunt teenager who told it like it was and wasn't afraid to say anything to peoples faces.

With that being said, Lily's character got on my nerves a bit because she was so irresponsible and inconsiderate. I know that a lot of teenagers act like her, especially when they come from households where the parents aren't parenting. It just got on my nerves a bit, and I couldn't stand that Lily's mom, Tanya, was so self absorbed and seemed to dislike children. I definitely think Tanya's lack of parenting significantly contributed to Lily's behavior as well as Lily's stepbrothers behavior. I intensely disliked Tanya because I don't understand how she could be so unconcerned about Lily missing. With that being said, I know there are parents that act just like Tanya and kids who act just like Lily and her brothers, so it definitely was believable.

The only thing that I didn't find believable about the entire book was that no one insisted that Lily get her DNA tested to prove that she was in fact the daughter of Will. Everyone just accepted it as truth because she looked a little like him and had some of his mannerisms. It would've been one thing if After You (Me Before You, #2) had been published before DNA testing was widely used, but in this day and age, it is a streamlined process that isn't even that expensive from what I hear.  The only thing I can figure is that Lily helped fill the void that Will left behind.

One of my favorite characters, other than Louisa, is Ambulance Sam. He definitely helped Louisa to learn how to love again. He was just an overall good guy. I hope we see more of him in the next book in the series. I gave After You (Me Before You, #2) four out of five stars.

Labels: after you ambulance depression dna testing england jojo moyes london louisa clark me before you support group will traynor