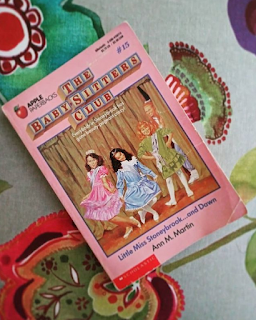 In the process of rereading books from my childhood, I picked up the book Little Miss Stoneybrook . . . and Dawn (The Baby-Sitters Club, #15) by Ann M. Martin. Typically, I don't care for books that are written about beauty pageants because they don't usually represent them correctly. This book was no exception. One of the reasons I usually take exception to books about pageants is that I participated in them for eleven years (from age 8 through age 19) and have fond memories of them; beauty pageants are usually portrayed in a negative light, especially by those who have never competed in them. After the death of JonBenét Ramsey, beauty pageants were put in more of a negative light. Pageants where contestants wear a lot of makeup started to be referred to as glitz pageants, and many pageants popped up where there was minimal makeup worn. (Yes, I know this book was written pre-JonBenét.)

The events in the beauty pageant weren't exactly represented correctly. There isn't usually a parade of the girls where they introduce themselves. Usually, the girls are introduced by an emcee who reads a little biography, or snippet, about the contestant as they walk the stage / runway. And, just as a side note, not all beauty pageants have a talent portion or interview portion. However, the little girl who won the pageant was representative of a portion of the girls who do enter pageants, but not all girls and their mothers are like these particular characters.

Another thing that wasn't exactly represented correctly is that there is no way babysitters, let alone ones that haven't competed in pageants, would prepare their charges for the competition and be backstage getting them ready. I understand why the author wrote the book this way; Ann M. Martin was trying to teach the lesson that being competitive isn't always worth it, especially when it can ruin friendships, but I feel like it would have been more realistic if the babysitters themselves had competed in a pageant themselves.

What I did enjoy about the book was the sub-plot of Dawn's family problems. When her parents divorced, Dawn's mother moved to Connecticut with the kids. Dawn's brother Jeff was having a terrible time adjusting to life on the East Coast and wanted to move back to California to live with their father. I felt like this was a very realistic situation for the most part. However, I'm not sure that the kids would have been separated from each other. Overall, I gave Little Miss Stoneybrook . . . and Dawn (The Baby-Sitters Club, #15) three out of five stars.

Synopsis:  When Jessi and Mallory are given a special ceremony for joining the Baby-sitters Club, Dawn is envious because she didn't get one. To prove she is a great babysitter, Dawn jumps at the chance to help out the Pike family and prepare Claire and Margo for the Little Miss Stoneybrook beauty pageant. But, things get out of hand when the rest of the members of the club decide to enter some of the kids they babysit for into the pageant to show that they are the best babysitter.