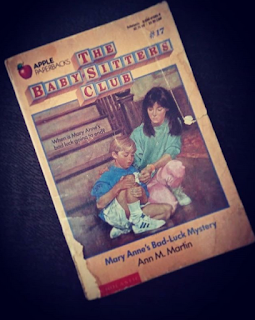 Mary-Anne Spier knew she shouldn't have thrown out the chain letter she received. Not only is she having the worst luck, but the rest of the baby-sitters club keep having bad things happen to them too! When Mary-Anne starts receiving letters threatening her and the rest of the club, and a bad luck charm necklace to wear, several emergency meetings of the baby-sitters club are called by Kristy so they can figure out how to counter act the bad luck.

What can I say about Mary-Anne's Bad-Luck Mystery (The Baby-Sitters Club, #17)? Holy nostalgia, Batman! This book made me feel nostalgic for my childhood . . . do kids even send chain letters any more, and do they still believe in things like breaking a mirror causes seven years bad luck?

This is one of the books in the series that I remember better than some of the others, and it was such a joy to reread. I figured out who sent the threatening letters and bad luck charm necklace very easily just as I did as a child.  The one thing that bugs me now (and remember bugging me when I first read it) was that there was no resolution to who actually sent the chain letter. It would have been nice to have that wrapped up in the ending.

I loved the fact that the story included a school dance and that it actually happened at night time like it did when I was in eighth grade. Now, if I remember correctly, the middle school dances happen immediately after school lets out, which takes all the fun out of it . . . at least to me it would. Another thing I loved was that it finally included more scenes with Logan, which made his character seem more real.

There really isn't anything bad that I can say about Mary-Anne's Bad-Luck Mystery (The Baby-Sitters Club, #17). This book made me want Ann M. Martin to write a lot more mysteries and was a major influence in making me love the mystery genre. I gave this book five out of five stars.