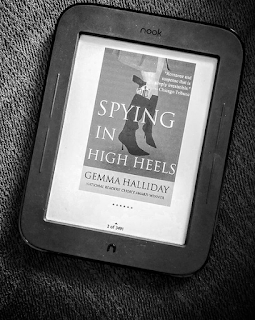 I've been in a bit of a reading slump the past few months . . . nothing really has been able to keep my attention very well, not even books by my favorite authors. So, I've been doing a lot of rereading of some of my favorite books, including those from my childhood, in hopes to get out of my slump. I recently had the yearning to reread the first book in the High Heel Mysteries by Gemma Halliday.

Synopsis of Spying in High Heels by Gemma Halliday:  Maddie Springer works as a fashion designer . . . that is a designer for kids shoes. In the midst of her current project of designing "Strawberry Shortcake" tennis shoes for tots, her attorney boyfriend, Richard Howe, cancels their lunch plans and goes missing. Howe becomes the prime suspect in a murder and fraud case involving his client Devon Greenway. Wanting to clear her boyfriend's name, Maddie is determined to insert herself into the police investigation in any way she can.

I enjoyed Spying in High Heels a lot better the second go around because I was in the mood for a light hearted, laugh out loud, cozy mystery. And, I did do a lot of laughing out loud. It takes a really talented author to make me actually laugh because I'm just a very serious person.  There were too many scenes to count that were hilarious. Many of the parts that made me laugh were parts where Maddie was acting ditzy in front of the main detective, Jack Ramirez. Some of the things she said or did, I could definitely relate to because I've definitely had my ditzy moments. (Can I just say that I totally love the character of Jack Ramirez and want a real life version of him and his family?)

The premise of the book is somewhat a believable story line, but don't go into it thinking this is going to be serious literature as it is a light hearted read that is fun . . . chick lit if you will. Certain situations were not very believable, so you really need to be able to suspend belief. And, there were quite a few typos that you'll need to ignore, but I'm not going to complain too much about it since I got the first five books in the series in a book bundle on my Nook Simple Touch (black and white ereader) for a total of 99 cents. The editing does get better as the books go along if memory serves me right.

If you're looking for quick read that doesn't take too much attention to follow along, I'd definitely recommend Spying In High Heels by Gemma Halliday. I gave it three out of five starts.