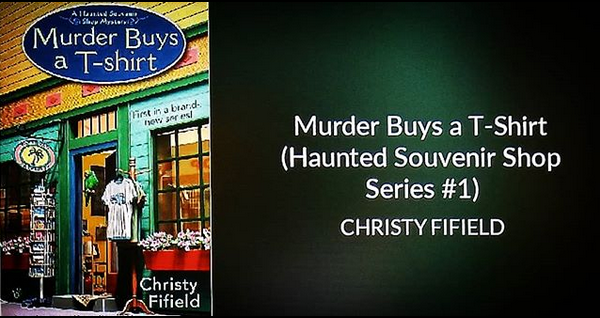 A while ago, I was looking for an inexpensive book to read that would fill the void of finishing another cozy mystery book series, and I came across Murder Buys A T-Shirt (A Haunted Souvenir Shop Mystery # 1) by Christy Fifield. It took me quite some time to actually pick it up to read, and I am so very happy I picked it up because I think I have a new favorite cozy mystery book series.

The main characters in Murder Buys A T-Shirt (A Haunted Souvenir Shop Mystery #1) are all very likeable, especially Glory Martine whose point of view the story is told from. However, the character that steals the show is her pet bird, Bluebeard. Although this is a cozy mystery, the mystery wasn't too big of a mystery. I didn't mind it too much because the story line and characters were so engaging. It made me feel as if I were part of the friend circle and actually lived there.

I loved the fact that the story took place in a town called Keyhole Bay, which is just outside of Pensacola, Florida. I don't know if Keyhole Bay is a real town or not, but I am very familiar with Pensacola and could imagine Keyhole Bay perfectly. It cracks me up that Pensacola is considered a big city in the book because I think of it as a very small town. I guess that is because I live in a very large metropolitan area. 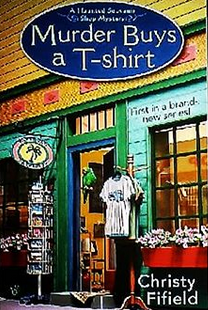 As far as figuring out whodunit, I was pretty sure I knew who it was, but I wasn't sure of the motive. The author also kept throwing suspicion on other characters, so that helped in keeping me second guessing myself. It does follow the typical formula for cozy mysteries, but that didn't keep me from enjoying the book immensely.

The book also has bonus material at the very end . . . all the meals that were served during the Thursday night social gathering with Glory, Karen, and their friends, are included. Even though I was born and raised in the south, I don't enjoy most southern food, so I probably won't try any of the recipes myself, but I thought this was a great idea for those who do enjoy southern food.

Synopsis of Murder Buys A T-Shirt: Glory Martine inherited 55% of her great-uncle Louis' souvenir shop called Southern Treasures. Her cousin Peter inherited the other 45%. When the local high school football captain dies in a car accident, Glory suspects it wasn't an accident and is on a mission to prove her suspicions.