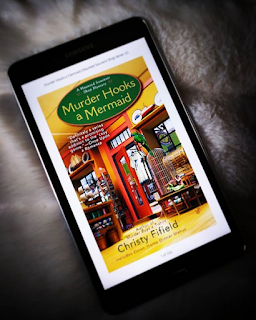 Once in a blue moon comes along a book that causes you to forget your surroundings . . . Murder Hooks A Mermaid (A Haunted Souvenir Shop Mystery #2) by Christy Fifield is one of those books. Much better than the first book in the series, Murder Buys A T-Shirt (A Haunted Souvenir Shop Mystery #1), I finished the sequel in less than 24 hours. If I hadn't had to get up in the morning to work, I would have stayed up all night to finish this book. Instead, I had to settle for finishing it tonight. I became so immersed in Murder Hooks A Mermaid that I completely tuned out the television and actually forgot where I was because I felt like I was one of the gang and was doing everything that Glory Martine was doing. I literally had no idea what time it was when I finished the book.

People don't just come back for no reason.

No truer words could have been said by Bluebeard . . . "People don't just come back for no reason." This immediately made me leap to a conclusion of who was the mastermind behind framing Bobby Freed, but I wasn't sure if I was actually right until I got to the end of the book and found out the connection and motive. With that being said, the mastermind couldn't have been anyone else.

Bluebeard, the talking parrot possessed by Glory's great uncle Louis, is the highlight of the book and is one of my favorite characters. You would think that this would make the book incredibly hokey, but it surprisingly isn't! What is funny is that he whistles at Glory's sort of boyfriend Jake and calls him a pretty boy. I think this is Uncle Louis' way of showing that he approves of Jake. I really wish we could get more backstory on Jake as it is hinted at that he is keeping a huge secret about his life before moving to Keyhole Bay, Florida. Hopefully, more of his backstory will be revealed in the future.

I loved that we learned a little bit more about Glory's childhood and that it tied into the title of the book. When I saw the title, I wasn't sure how mermaids were going to tie in, but I was pleasantly surprised. All in all, Murder Hooks A Mermaid (A Haunted Souvenir Shop Mystery #2) by Christy Fifield was a great cozy mystery and is the perfect story to read on vacation. Like the first book in the series, it includes recipes for the food mentioned throughout the book. I give it five out of five stars.

Synopsis of Murder Hooks A Mermaid:  When Bobby Freed, Karen's former brother in law is arrested for murder of a diver, Glory rushes to Karen's side to offer any help she can to prove Bobby's innocence and is surprised when it looks like Karen and her ex-husband may be getting back together.