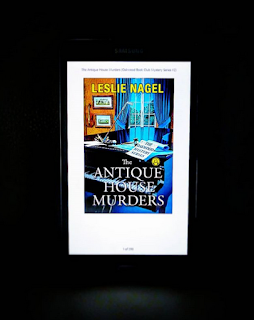 The Antique House Murders (Oakwood Mystery, #2) by Leslie Nagel is the the sequel to The Book Club Murders (Oakwood Mystery, #1), and it starts off with quite a bang. When the old, decaying mansion called Mulbridge House in upscale Oakwood, Ohio is set to be torn down and the belongings inside to be auctioned off, the town becomes divided. Half the town is in agreeance with S.O.A.P. that the home needs to be preserved and turned into a museum. The other half of town sides with the heirs who want to build fourteen homes on the property. When Calvin Prescott, owner of the company auctioning off the belongings of Mulbridge House, is found murdered in his office by Charley Carpenter, her boyfriend, detective Marcus Trenault, makes the connection between Prescott's death and a string of burglaries in the area. Unable to stay out of the investigation as an amateur sleuth, Charley uncovers a massive scheme involving the mansion and the land being developed for the homes.

It's rare that I can say a sequel is better than the first book in the series, but the Oakwood Mystery book series just keeps getting better and better. Much like the first book, this edition mentions various real places in the Dayton, Ohio suburb of Oakwood. I loved knowing the streets and places she mentioned were real. Sinclair Community College, Wright State University, and Far Hills Avenue are all real places mentioned. I find that this always helps cozy mysteries, or any book for that matter, be more believable.

Another thing that makes this book amazing and believable are the relatable characters. I absolutely am invested in Charley's story line and can't wait to read the third book in the series. Additionally, the author did a great job in trying to throw suspicion on several of the characters. However, I figured out who the villain was relatively early on and was ecstatic to find out that I correct in my reasoning.

Although The Antique House Murders (Oakwood Mystery, #2) is classified as a cozy mystery, it doesn't really read as one and is by far, heads above its competition. Unlike other books in this genre, it doesn't continuously rehash the plot of the previous book or constantly remind you of who the characters are. I love the fact that the author gives the reader credit for being able to keep up. With that being said, you definitely need to start with the first book in the series.

I gave this book five out of five stars for the reasons I've listed above and hope that the author continues writing more books in the series.