When I saw that a television movie for V.C. Andrews' book Heaven (Casteel, #1) was going to be shown on the Lifetime Channel, I decided I needed to reread the book before watching the movie as it had been several years since I read it. All I really remembered was that it was one of my least favorite of her series, and I'd have to say it is still one of my least favorite. It's not that it is poorly written because it is actually written really well. The series just wasn't my cup of tea compared to some of the other series.

Things I loved about the book were the family dynamics because there are people who have multiple generations living under one roof. So many families are dysfunctional as well, so this book really brought this issue to life. It also showed how people can be really poor and barely eeking out an existence. What I hope people learned from Heaven (Casteel, #1) is that there are people who have it worse than you do and don't be so quick to judge people because you really have no idea what their personal life is like. 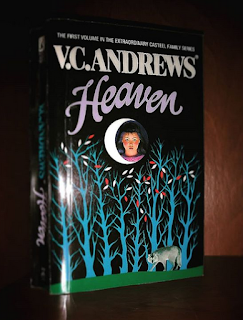 What I absolutely disliked about the book is that it had a small scene with animal brutality, and I find animal abuse so upsetting. I didn't remember this part in the book, but this definitely contributes to why it is one of my least favorite book series by V.C. Andrews.

All of the book series by V.C. Andrews seem to have child abuse and molestation or incest in them, but the child abuse in this book really got to me. I'm not going to go into detail about it, but it makes me wonder how this kind of behavior flies under the radar in the book and also made me realize this often happens in real life too. It is very sad what our society has become. I'm not sure if the point of this book series is to make more people aware that this does go on, but I do hope people can take away some lessons from it and apply it to their own lives and step in if they ever see abuse going on.

Heaven (Casteel, #1) is definitely a twisted novel and hard to put down because you just have to know what happens. It definitely made me glad that I have the family I do and that they would NEVER do any of this. I love books that make me think about different types of situations and realize that I have it pretty good. As I read this book, I was imagining it in the present day, or at least in the 1980's as that was when it was published. It was only when Heaven and Cal went to the movies to see the movie The Sound of Music that it was set in a much earlier decade. Maybe that is why the child abuse flew under the radar. All in all, I'd give Heaven (Casteel, #1) by V.C. Andrews three out of five stars. This book is definitely not for everyone as it is a disturbing read, and it is definitely not for anyone under the age of thirteen or fourteen.

Synopsis of Heaven (Casteel, #1):  The Casteel family is the lowest, poorest scum of the hills. Despite that, Heaven is one of the prettiest and smartest girls and has hopes that she and her four brothers and sisters would one day escape Winnerow, West Virginia to have a better life. However, when her stepmother runs off, their father schemes and destroys that dream forever.