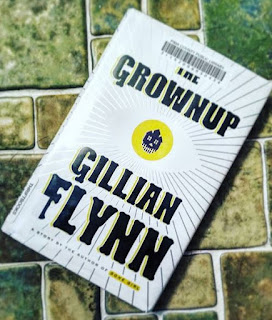 When The Grownup by Gillian Flynn came out in print, I was super excited about the book. Little did I know that it was actually a short story. Then, life got in the way, and I forgot about the book. I finally ordered the book (short story) from ThriftBooks.com and finished reading it in the wee hours of today. I wasn't entirely sure what the synopsis was when I first began reading it, but it was super intriguing.

The Grownup is about a woman who works at a store with psychics. At least, that is what is promoted in the storefront. In the back of the store, there are sex workers who work their way to the front of the store to be an actual "psychic". When a customer named Susan Burke comes in for an aura reading because she thinks her renovated Victorian home is haunted and her stepson is becoming possessed by the house, the psychic comes up with a way to con the woman out of $2,000.

This story was not very satisfying when it was all done. None of the loose ends were tied up, and it left me wondering what the truth actually was and what would happen. I realize that this was a short story, but it could have been turned into at least a novella if not a full fledged novel. The Grownup was reminiscent of the movie The Omen. Whenever a story reminds me of another story or a movie, it always makes me wonder if the author was influenced by those other stories and movies.

All I can say is that The Grownup had the potential to be a great story, but it was very lackluster when I got into the actual meat of the tale. And, I am so glad that I didn't pay $9.99 plus tax for the book. I bought it used from Thriftbooks.com and saved myself some money. If you want to read the book, I highly recommend saving your money and borrow it from your local library. I gave The Grownup two out of five stars.