Book Review: The Shining (The Shining, #1) by Stephen King 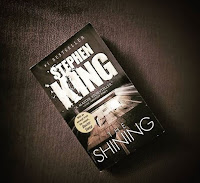 Oh . . . my . . . god. I don't even know where to begin with my book review of The Shining (The Shining, #1) by Stephen King. The first thought I had when I finished the book was that I definitely needed to re-watch the movie because the book was written so well that it just left me in awe.
I'll be up front . . . I haven't read a lot of Stephen King's books yet because my mom wanted me to be a kid and actually read age appropriate books growing up, so I am a bit behind the eight ball. (I wasn't allowed to read his books when I was in middle school or high school even though other kids at school were reading him.) Now as an adult, I've been slowly but surely reading his books.  The Shining is definitely one of my favorites by him so far.  I have to say that I'm glad that my mom made that decision for me because I can see the reason why. King's books have such adult themes in them that I think I would have had trouble sleeping at night if I had read them as a kid. Adult themes in The Shining include alcoholism and child abuse, and King doesn't hold back with his descriptions. Some of the books I read as kid did deal with these issues but were kid friendly unlike this book.
Over the top creepy is how I would describe The Shining. He takes the horror and paranormal elements to a whole other level . . . animal shaped topiaries coming to life, a hotel that comes alive with guests who have been murdered there, and a caretaker who loses his mind . . . it will seriously leave you sitting on the edge of your chair. Every time I picked this book up, I would be on edge and would jump whenever my house creaked and groaned. It got to the point where I would have to stop reading it in the wee hours of the night, and this is coming from a person who LOVES horror movies and books! At least it didn't give me nightmares like Desperation did!
My hopes were to read this book quickly so I could I could continue on to read Doctor Sleep (The Shining, #2) before seeing the movie in theaters. There is no way I will be able to read the sequel before the movie leaves theaters, so I'm not going to push myself to do so because I need to take a break between Stephen King novels because they are so intense!!
I definitely recommend The Shining and gave it five out of five stars. People may want to shy away from it if they have suffered from alcoholism or abuse of some sort.
Synopsis of The Shining (The Shining, #1):  Taking a job as an off season caretaker at the Overlook Hotel seems like a perfect chance for Jack Torrance to have a fresh start and rebuild his relationships with his wife and son. And, it will give him the time to work on his writing. As soon as the harsh winter months roll in, the hotel begins to feel sinister and too remote. And, Jack's son, Danny, is the only one who seems to notice the strange things happening in and around the hotel.
Follow Us On Social Media